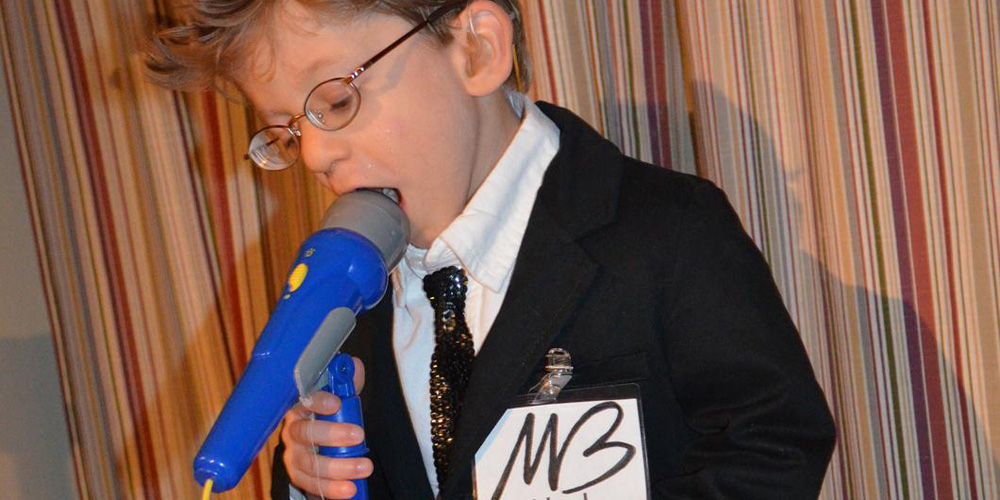 Passion is the life force for Houston, who is thriving while living with vision, hearing and other challenges associated with rare and complex Noonan syndrome.

With his microphone in his hand and dressed in the trademark black blazer, skinny tie and Converse runners of his idol, Michael Bublé, Houston Crocker joyfully imitates every move of the Canadian crooner.

Such passion is rare in a four year-old, but it’s a life force for Houston, who is thriving while living with vision, hearing and other challenges associated with rare and complex Noonan syndrome.

Once described as the sickest baby in all of British Columbia, if not Canada, Houston has progressed by leaps and bounds with supports and strategies from the BC Centre for Ability that focus on his love of music and Michael.

“The beauty of our little one and his personality is that he has this amazing passion,” says Houston’s mom, Carly.

Houston’s passion for Michael Bublé was sparked when he heard the singer’s version of Georgia On My Mind. Carly was pregnant at the time and the baby was named Georgia.  The song became known as her song and something “struck a chord literally and beyond in Houston,” Carly says. “And what’s so inspiring is music gave him crazy amounts of strength and motivation.”

Houston’s family and support team, including Centre therapists, have collaborated on goals for him that he’s successfully reached – with Michael Bublé as the catalyst.  “Michael Bublé is part of the team, he just doesn’t know it,” says Carly.

For example, Carly says Houston learned to eat food by mouth during snack time at preschool. After each bite of food, Houston, who’d developed an oral aversion after being tube fed for years, was shown a photo of Michael giving the thumbs up. This encouraged him to keep eating.

Then there was the first time Houston didn’t need sedation for his heart test. That’s because he was listening to Michael’s music on an iPad. Michael also played a part in Houston’s decision to wear his hearing aids, which help with his communication skills.

Houston’s joy is contagious, inspiring everyone he meets, Carly says. She and her husband Mark say their son is their hero because of his will to overcome challenges every day.

The Crockers’ journey began before Houston was even born. A congenital heart defect and other significant health issues were discovered while he was still in the womb. Surgical procedures were done to remove fast-pooling fluid around Houston’s heart and lungs.

Deciding his best chance for survival was treatment outside the womb, Houston was delivered by caesarean section at 31 weeks. Rushed to the neonatal intensive care unit, Carly says she and Mark “had no idea if we would ever see Houston alive again.”

In the following weeks, Houston fought for his life as he endured infections and surgery. His parents never left his side and actively participated in his care, threading tubes and emptying bags connected to his tiny body. After 97 days, Houston was able to go home thanks to “mega love, prayer, and tender love and care,” Carly says.

Houston was less than a year old when a BCCFA speech language pathologist began working with him on his swallowing issues. A physiotherapist and occupational therapist later joined the support circle. Carly calls them “miracle workers.”

“First and foremost, I feel they treat Houston like their own (child),” she says. “And he is able to thrive — I feel it, I see it. He loves them, he runs to them. And they want to see him do his best.”

Carly adds that the team gives advice and guidance that make everyday life easier. “They’ve given Houston extra support but they’ve also given the family the support.
She also appreciates that the Centre provides support in the school setting. “They not only come into our home, but they also go in to the preschool and observe and help teachers if they’re struggling with issues.”

Surrounded by love and support, Carly has come to know that it takes a village to raise a child. “Many people have been involved to give Houston what’s needed to thrive and grow. “

It’s equally remarkable how Houston is able to see the world as a good place after his early days of pain and suffering.  With so much love for people, Carly sees much potential in her son.

“Mark and I see great things ahead for him. And I know with the support that he’s been given at an early age, it sets the bar high, and we aim to get him there and support him with all of our love and energy.”