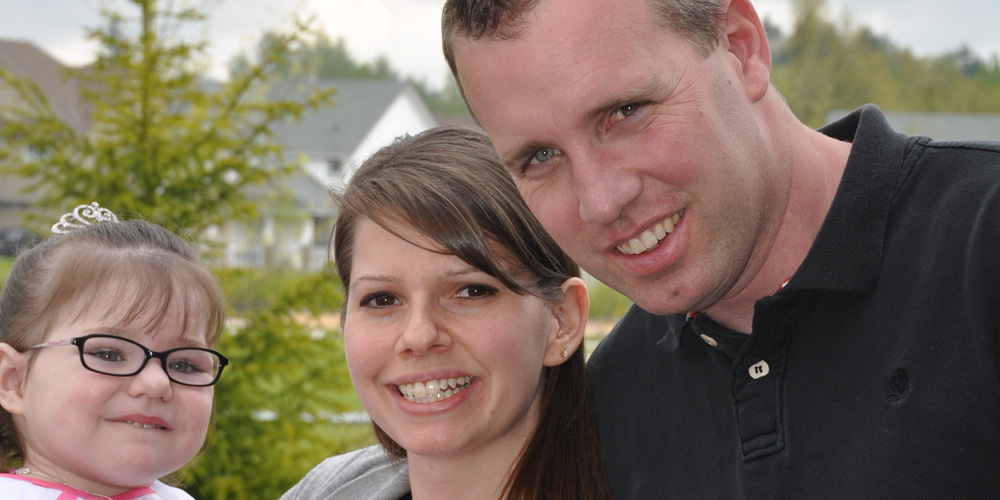 A devastating fire inflicted life-threatening injuries, and took the life of Sammy’s twin sister, Ava. Sammy spent the next three months in intensive care fighting for her life.

Aja Irwin has high hopes for her precious three-year-old daughter Samantha who is affectionately known as “Sammy.”

“Sammy is a very happy kid. She’s bright, cheerful and wakes up in the morning happy, faces the day and works through her therapies. My hope for her is that she will carry on with that positive outlook and always feel loved and valued.”

No one could love and value Sammy more than Aja and her husband, Mike. They’ve been a relentless source of support for Sammy.

Aja and Mike became primary caregivers of Sammy, who is Aja’s niece, and then adopted her.

Aja and Mike were engaged to be married when Sammy and Ava were caught in an apartment fire on Jan. 4, 2011. Just 20-months-old, they were rushed to hospital. Four days later, Ava passed away. Sammy spent the next three months in intensive care fighting for her life. She had second-degree burns to 30 per cent of her body and was suffering from severe smoke inhalation, which is believed to have contributed to an acquired brain injury.

Seven months after the fire, during the same August week as Aja and Mike’s wedding, Sammy was transferred to the Sunny Hill Health Centre for Children. In December, she went home with Mike and Aja, and the family connected with the BC Centre for Ability.

Aja says this was a blessing to someone who had no experience caring for a child. “It was a huge, huge piece of what Sammy needed in a chaotic time that I didn’t have to worry about. We didn’t have any idea of what it meant to have a brain injury or what kind of progress she would make. All we knew is that this amazing little girl needed love and support. We were so happy to give her that and were willing to do whatever it took.”

The Community Brain Injury Program worked with the Irwins for eight months – two months longer than usual, and Aja is grateful for the extension. Since discharge from the program, the Irwins have been able to access resources to ensure Sammy continues to receive therapy.

Sammy is attending preschool and has participated in community programming. The social interaction at a moms-and-tots library program was beneficial to Sammy’s development. Once quiet, Aja says Sammy made sounds and noises in order to join in with other children. “It was hugely promising and probably gave her a feeling of acceptance that she’s just one of the kids.”

Today, Sammy is using sign language and learning to verbalize words. Tight leg muscles make standing and walking uncomfortable, but she “scooches” across the floor to get around. Sammy uses a G-tube to receive liquid, but is getting 90 per cent of her daily calories by eating food.

Bright, happy and interactive, Sammy far surpasses expectations from when she was in hospital. Aja credits Sammy’s feistiness and will to be independent for helping her reach this point. The support of both Sunny Hill and BC Centre for Ability teams, as well as family members, has been key – with Aja saying her husband has been her rock.

© 2021 BC Centre For Ability. All Rights Reserved