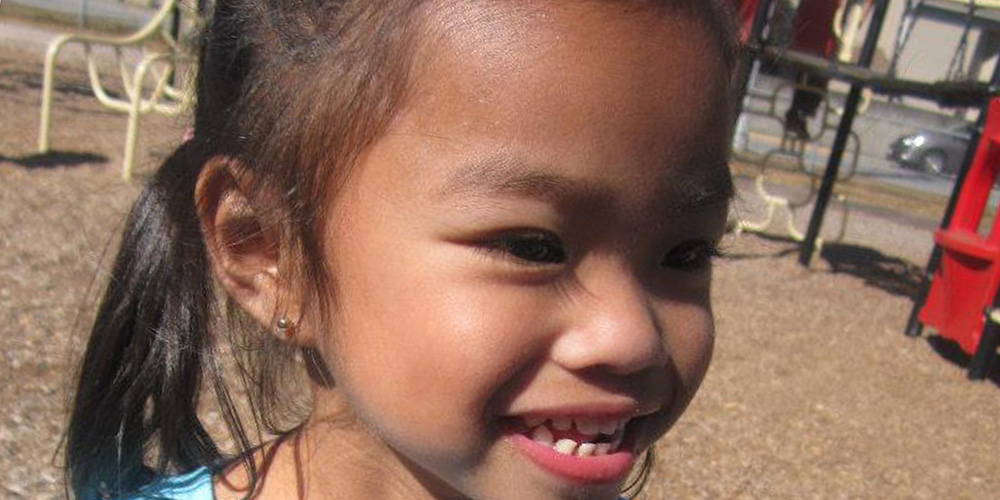 Focusing on what Angela likes to do, parents Shine and Sherwin Misa draw on Angela’s strengths and help expand her development.

Shine Misa is overjoyed when she looks at how far her daughter, Nesiah – who goes by her middle name Angela – has progressed in preschool. Angela recently participated in her school concert, actively singing and dancing with the rest of the students.

Angela was born with meconium aspiration syndrome. Meconium is the first stool of an infant and is normally stored in the infant’s intestines until after birth. Critically, when meconium is ingested or inhaled when an infant is in utero, respiratory problems occur. Angela, who had fully aspirated meconium, was born with respiratory and heart problems and has developmental delays.

“The doctors separated me from Nesiah at birth and they took her to Children’s Hospital immediately, I didn’t have the opportunity to hold her,” recalls Shine.

Angela’s first 90 days of life were the most difficult. The Misa family was given three choices by the doctors: to let her go; to put her on a machine that could help clean her blood, but risked causing infection or bleeding in her brain leading to brain damage; or to fly her to another province and wait for a heart donor. Shine and her husband shared some very difficult conversations, ultimately choosing to put Angela on the machine.

But the machine did not work. Worse, the longer Angela was on the machine the higher her risk of infection. “We prayed and we consulted with our pastors,” says Shine. “We each received the same advice. We knew we had to put our faith in God, remove the machine, and let God do his work.”

Connecting Angela to the machine had required open heart surgery, and a second round of surgery was now required to remove it. The doctors warned that the first 30 minutes of the operation was crucial. If they heard the phone ring in the chapel where they had gathered their family and church community for prayers, it was an indication that Angela had not made it.

“You can imagine that was the longest 30 minutes of my life,” says Shine. But the family discovered that Angela is a fighter and a survivor, first through surgery, where she was revived a number of times, and second, on the day she left the hospital. That’s when the BC Centre of Ability first stepped in to help the Misa family overcome hurdles in the months ahead by focusing on small milestones.

“We would let Angela play with her food and almost give her anything to get her to put food in her mouth. She would take pudding and draw with it, we tried all angles,” says Shine. Having been tube-fed from birth, Angela had oral aversion. “While most kids were putting anything in their mouth, she started with one grain of rice.”

When Angela was able to put 10 grains of rice in her mouth, Shine remembers feeling joy.

One grain of rice and perseverance from the family led to a half cup of rice during meal time. This extraordinary leap was made possible because the family understood that by focusing on what Angela likes to do, they draw on her strengths and help expand her development. These strength- based concepts are core teachings at the BC Centre for Ability.

With Angela’s transition into kindergarten, the Misa family is “graduating” from Early Intervention Therapy Services. Asked about her experience with the Centre and what she can share, Shine says, “I felt so tired in the beginning and my vision clouded with worry. The Centre came here. They knew what to do and gave us the knowledge.”

Sign-Up for the BCCFA newsletter and get the latest information on programs, events, stories and more.

© 2021 BC Centre For Ability. All Rights Reserved, BC Centre for Ability Association